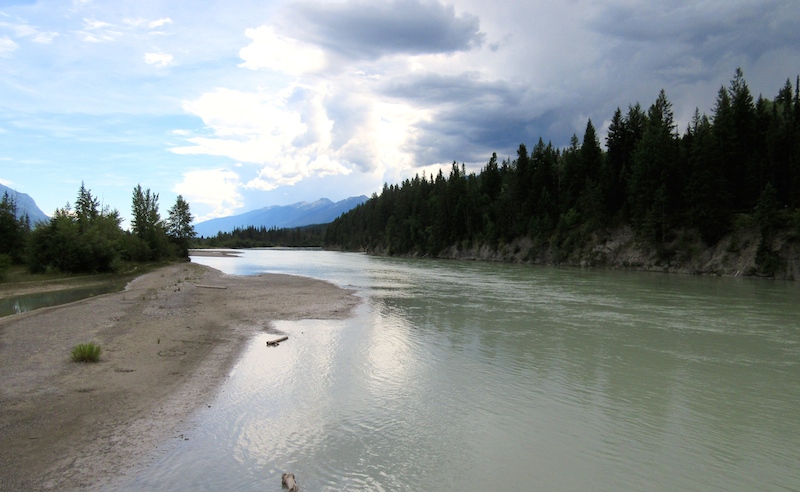 Stage 5 wrapped up in Golden today, and what a great one. Today was the shortest stage of the race, a mere 30km, and 1050m elevation gained. It was a true mountain bike race in that it was all mostly janky singletrack. You really had to be on your toes all day. Most of the elevation gained was in the first hour where we climbed up a new climbing trail that is made up of 484393489 bermed switchbacks. Luckily it was under the covering of the lush forest, and other than the horrible pain was quite pleasant.

Usually toward the end of the climbs, I am the only one in the group who is yelling at the climb in anger, but today there were a few others doing the same! Once we crested the top it opened up into a great ride.

One thing Ive learned about this race is that there is no easy gifts, or hiding from the climbing. There is never a part where you are ‘oh my I just gained that missing 500m and didnt notice.’ Nope. The trick is to never look at your ‘meters gained’ on your computer because its never as high as you want, and then you just wait until you go around a corner and there is a 20% thirty minute climb.

Which brings me to today’s stage being the shortest. The reason it is  the shortest is because tomorrow is an absolute monster.

Last Day. Everyone is tired. Everyone has had at least 1 bad day, or a mechanical or whatever. Tomorrow is the last day but it has the potential to be the most memorable one. 1650m elevation gain, 57km with a 3km timed decent. Its going to be a monster. Im at the point where I dont care about how hard the stage will be tomorrow. This event has been truly epic in that you get broken down and rebuild again and again and again. There is constant chatter in your brain about ‘just a little farther’ ‘just pedal’ ‘its hard for everyone else too’ to the point where you feel like you can basically go through anything. Is tomorrow going to suck a lot at times? Shit yes.

I got stung in the nipple by a bee yesterday.

Being a man with a healthy man pelt on my chest, I forgo base layers as they are too hot. So, usually I fly with the zipper fully open, and by god getting stung in the nipple hurts.I don’t mind the odd nipple twist in bed, but not when I am railing one of the rockiest and knarliest decents in British Columbia. It is a major distraction.

As mentioned, Golden is a great place. Live music, great beer, great food. great geople, great riding. After the stage today I took my daily shower, but today in Cedar Lake. If you are swinging through this area I would recommend camping up there, as its beautiful and a little isolated.

The Guys in the Woods

Im not talking about the ‘guys in the woods’ that your parents told you to stay away from when you were a kid. For the past few stages there have been 2 guys hanging out in the trails yelling at racers. One stage they offered whisky shots! At the time I passed on it as I couldn’t remember my own name and it was 31 degrees out, but the next day they had a beer feed. Since I was feeling great I went for the beer feed but then I realized it was a big trick, and the beer was attached to a stick with a string that they pulled out of reach as you went for it! Bastards..

What to pack tomorrow

The editors want this column to be less about my life drama, and more about helpful tips with endurance racing and Singletrack 6. During dinner this evening(which was a great beef stroganoff!) I looked around and felt great about the mountain bike world. Hundreds of people from around the world coming here just to ride some sweet trails, hang out with good people and push themselves. Its enough to make you cry like a big man baby its so good.

However, this love will not get me through 1650m elevation gain tomorrow, so Im going to take 4 gels, and drink a lot of coke and hope for the best.