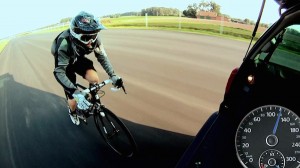 A tired cyclist stuck his thumb out for a lift: After 3 hours, hadn’t got anyone to stop. Finally, a guy in a sports car pulled over and offered him a ride. But the bike wouldn’t fit in the car. The driver got some rope out of the trunk and tied it to his bumper. He tied the other end to the bike and told the rider: “If I go too fast, ring your bell and I’ll slow down.”

Everything went well until another sports car blew past them. The driver forgot all about the cyclist and put his foot down. A short distance down the road, they hammered through a speed trap.
The cop with the radar gun and radioed ahead that he had 2 sports cars heading his way at over 120 mph. He then relayed, “and you’re not going to believe this, but there’s a cyclist behind them ringing his bell to pass!”.