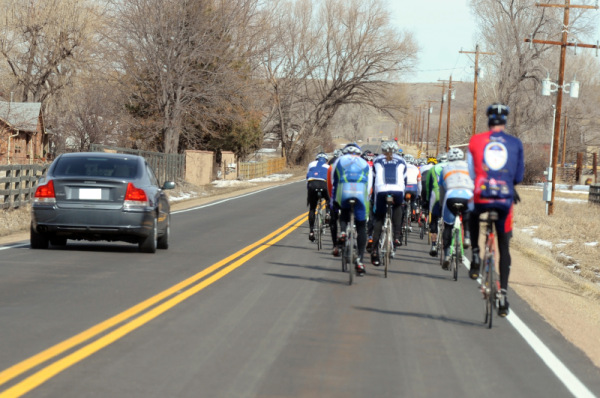 If you have ever been on a large cycling group ride, you have probably blocked traffic, ran a red light, or rolled a stop sign. All of these have multiple issues with safety, the image of cycling portrayed, and respect. The problem lies in the mentality of a group versus an individual. Any one of the riders on the group ride would probably obey all traffic laws and not be a problem with traffic on their own. However when in a group, any group be it fans of a sporting event, a group of motorcycles, or a protest, everyone does what the group as a whole is doing and each has the mentality that everyone else is doing it so it must be okay. This mentality quickly becomes a problem in cycling due to riders not wanting to be left behind at intersections or riding harder in the wind in order to stay out of the way of vehicles in the middle of the lane. With the issue being the mentality of the group as a whole and not that of the individual, how do you change it for safer, more respectable group riding?

This article will go into more detail but in general it is the focus of keeping everyone safe. You ride with the thought of everyone else in mind meaning you ride smoothly with no sudden movements, point out obstacles, signal turns and when you’re stopping, and obeying all traffic laws meaning you stop at red lights and stop signs. Doing so not only leads to safer riding but also a more pleasant riding experience as the constant risk of crashing is reduced. When groups though start to become larger and go faster and faster, these rules start to go one by one with the focus moving toward effort, speed, and riding well, not etiquette.

When Your Cycling Group Ride Blocks The Lane

One of the first issues to arise when a group starts to ride unruly is that they drift out into the lane of traffic often blocking it completely. This arises for a few reasons. The first is that as the wind comes more and more from the side of the road, the better draft is further toward the center of the road. The rider following the first rider will naturally ride slightly further into traffic to get a better draft. The riding following him/her will then do the same and before you know it, the riders behind are all the way to the yellow line with no one wanting to be the rider riding in the wind further to the side of the road. A second reason that riders will ride all the way to the yellow line is that the pace has slowed, say on a climb, and riders will fan out covering the entire lane. A third reason that riders will take the entire lane is that there are other slower riders or other obstacles on the side of the road. This forces the first riders further into the lane and the riders behind follow suit. A fourth reason for riders taking the entire lane is two-fold. When a group or individual is riding at the speed of traffic they can move out and take the entire lane because no one will pass. A lot of group rides will have sprint points and the speeds are often closer to that of traffic so riders will take the entire lane. The problem here arises when they are going full tilt but are not actually faster than traffic and then just impede it.

When Your Cycling Group Ride Runs A Traffic Light

Intersections are difficult with large groups particularly if the time the light is green is short. The issue here is that the riders who make it through the light first keep riding regardless if the tail of the group makes it through or not. Not wanting to be left behind, the tail of the group continues through the red light forcing the rest of traffic to wait. With a large group, this can be a considerable amount of time.

To correct this, it is two-fold. First, the riders in the front need to ride slowly and wait for the tail-of the group to catch up after they wait for the light. The second is that riders mid-group need to stop when they see that the light has turned yellow and wait. Everyone will be much more apt to do this knowing the group will wait.

When Your Cycling Group Ride Rolls A Stop Sign

Stop signs are also difficult with a large group particularly if it’s crossing a busy road. Four-way stops are easier in that once the first riders go, the rest follow forcing traffic to wait in the opposing directions. This can be inconvenient for them but is safer as if the group tries to stop mid-way across to let other traffic go, some riders may still trickle across the intersection making for a dangerous situation. A two-way stop with a busy road to cross can be one of the most dangerous scenarios in group rides. The front riders may go across because it is clear but a car can quickly come up to the intersection and may not slow for riders still in the road crossing. The same situation applies with a traffic light where riders don’t want to risk being left behind so continue to cross despite the risk.

The same approach applies to stop signs as traffic lights. The first riders through a stop signed intersection need to wait until the group has all safely crossed the intersection and rejoined. With a busy two-way stop, riders mid-group need to keep aware of upcoming traffic and loudly announce “car-right/left” and “stop” so the riders around are aware and stop abruptly. Once it is clear both ways, the group can continue crossing the intersection.

How To Prevent Traffic Problems – The Pre-Ride Talk

Once a group is already in a certain mentality during the ride, say riding in traffic, rolling stop signs,  and running red lights, it becomes very difficult to change the group mentality toward safety and respect for traffic. This is where before the ride, something needs to be said relating to all of the above. It doesn’t need to be a full lecture but just a note on each so it is in everyone’s mind at least at the beginning of a ride. It probably won’t be remembered by all throughout but when one of the above begin to occur, someone saying something quick results in people actually listening and doing it because it was already stated and everyone was on the same page. When someone just tries to call one of these out mid-ride, it becomes difficult for a change in action to take place. Typically there are always more experienced riders on large group rides. They should be the ones who take charge and say “Hey, quick note on ride safety.” to everyone. Some riders may scoff at this but this should be an every group ride practice. Stay safe and ride smart as a group.